Nursultan Nazarbayev International Airport (formerly known as Astana) is located within the Kazakh capital, some sixteen kilometres from the city centre. It is considered the second largest air harbour in the country after Almaty.

The airport consists of two passenger terminals: T1 and T2. It is worth noting that the latter was designed by prominent Japanese architect Kisho Kurokawa. ATMs of several financial institutions, located on the ground floor of T1, as well as on the first and second floors of T2, are at the disposal of passengers.

Free 24-hour Wi-Fi is available throughout the air terminal complex. To connect, select one of the networks – OpenWiFi_NQZ or OpenWiFi_NQZ1 – and then accept the terms of use and authorise yourself via SMS.

It is one of the base airports of the national carrier Air Astana. In addition, popular low-cost carriers such as FlyArystan and Wizz Air operate flights here.

Airport Nursultan Nazarbayev has a code ‘NQZ’ according to the classification of the International Air Transport Association.

From the airport to Astana

There is not much choice here, which is probably for the best, given the territorial proximity. Only two modes of transport link the air harbour with the capital of Kazakhstan – bus and taxi.

To find cheap hotels in Astana, we recommend using the online travel agency Booking.com, which will select the best options for you.

The easiest way into town, of course, is by taxi. Cars are on duty at the Railway Station Square, at the exit of the passenger terminals. The approximate fare to the Baiterek Monument in the centre of the capital is 2,000 tenge (the currency unit of Kazakhstan), which equals about €5. Journey time is 25 minutes.

The most economical way to get from the airport to Astana is to take bus lines No.10 and No.12. The cost is 90 tenge (€0.2) if you pay by credit card and 180 tenge (€0.4) for cash. The first runs at 5-7 minute intervals and the second at 15 minute intervals. Both traverse the city centre, but note that only bus No.10 reaches the railway station, it has a terminus there. Opening times for these routes are from 6 a.m. to 11 p.m. 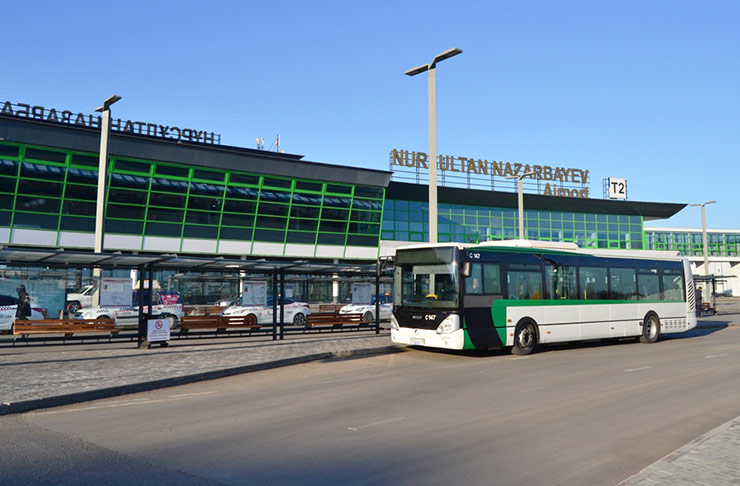 There is also the express bus No.100, which departs every 15 minutes from Nursultan Nazarbayev Airport towards Astana, making a number of stops along the way, including in the city centre and at the railway station. A ticket will cost 180 tenge (€0.4) if paying by transport card and 250 tenge (€0.5) if paying by cash.

Together with the author of this video you walk through the entire airport complex, from disembarking the plane to finding transport at the terminal exit.