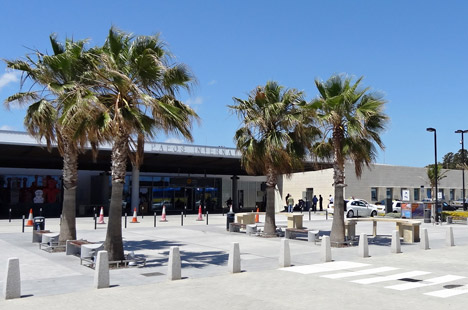 Paphos International Airport is located in the western part of the island of Cyprus. It is a small airport with only one terminal, popular among the low-cost carriers, including the market flagship Ryanair, for which this airport is a hub.

Paphos Airport is preferred by tourists heading to the west coast of Cyprus, mainly the city of Paphos which is located 6.5 km from the airport.

Also it is convenient for those passengers whose final destination is another resort city – Limassol, located to the south. This is because Paphos Airport is much closer to Limassol than Larnaca Airport, which is considered the main airport in Cyprus.

From the airport to Paphos

With the exception of cabs, the only public transport linking Paphos Airport with other Cypriot cities is the bus. Passengers have several routes to choose from.

To find cheap hotels in Paphos, we recommend using the online travel agency Booking.com, which will select the best options for you.

To get to Paphos city, you’ll need bus No. 612, whose final stop is the bus station near the port. This is the heart of Paphos tourist area, and you can walk to your hotel from here, or change to another route (such as No. 615 to reach the legendary Coral Bay beach). The 612th route heads to the city every hour. The journey will take about 30 minutes. 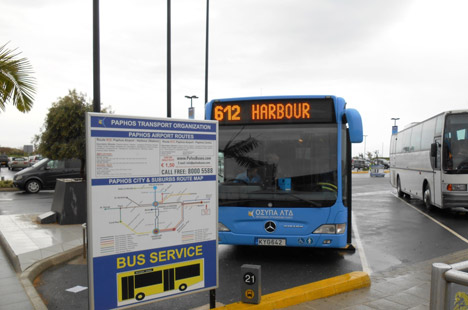 Also in Paphos there is another bus No. 613, but this route runs only twice a day and goes to the city centre, where tourists usually do not need.

To find the bus stop is not difficult: right at the exit of the terminal (across the street) there is a parking lot of all bus routes and cab services. The fare on city buses is only €1.5. You can buy tickets from the driver.

A cab ride to Paphos will cost around €35.

From Paphos Airport to Limassol, Ayia Napa and other cities

If you need to go from Paphos Airport to Limassol you can use the buses, operated by Limassol Airport Express, which depart to the city 3-4 times a day. The fare is €9 for adults and €4 for children. The travel time is 50 minutes. Tickets can be purchased from the driver. The schedule is available here.

You can also get to Limassol by minibus Travel Express. In this case the trip will cost €12.40 per person. In addition, minibuses of this company connect Paphos Airport with Larnaca (including a stopover at Larnaca Airport), Ayia Napa, Protaras, Nicosia and other popular destinations. More detailed information on their website – http://www.travelexpress.com.cy/en-us/Fares.

Another option is Kapnos Airport Shuttle buses, which will take you to Larnaca and Nicosia for €15. They leave at intervals several times a day. The journey will take one and a half hours. Details are here – https://www.kapnosairportshuttle.com/fares?locale=en.