Nikola Tesla International Airport, named after the outstanding Serbian scientist, is located eighteen kilometres from Belgrade and twelve kilometres from the city’s railway station. Being the biggest and thus the busiest airport in Serbia, it also serves as an important transportation hub in the entire Balkan Peninsula.

The airport consists of two terminals connected by a common corridor. It is also worth noting that Belgrade Airport serves as a hub for the national carrier Air Serbia, while the popular European low-cost carrier Wizz Air has its base here.

Free unrestricted Wi-Fi is available throughout both terminals. In addition, passengers can spend their time waiting for their flight in a special gaming area equipped with the latest gaming consoles at no charge. As for ATMs, they are located in Terminal 2, with eleven in total.

According to the classification of the International Air Transport Association, Nikola Tesla Airport has a code ‘BEG’. From the airport to Belgrade

Leaving aside taxis, which will be discussed later, there are three bus lines between Nikola Tesla Airport and the Serbian capital:

Let’s look at each route in detail.

To find cheap hotels in Belgrade, we recommend using the online travel agency Booking.com, which will select the best options for you.

Bus No.72 stops right outside the terminal and takes no more than 40 minutes to reach central Belgrade. The terminus is Zeleni Venac, the vegetable market area. The ticket costs 89 Serbian dinars (€0.80) if purchased at a ticket counter, or 150 dinars (€1.30) if purchased by the driver. As is the norm for public transport, this bus makes many stops and may therefore be overcrowded. A map of the route can be found here.

The preferred option for tourists is to take the A1 shuttle bus. This small bus makes just three stops on its way to Belgrade: in the new Fontana district, near the train station and at Slavija Square. It will take you half an hour to get to the city centre. You can buy tickets from the driver. You’ll have to pay 400 dinars (€3.40) for comfort, though. It’s easy to find the A1: when you exit the terminal, turn left and after 10 steps you’ll see the bus stop with the company stand. The bus leaves on schedule. 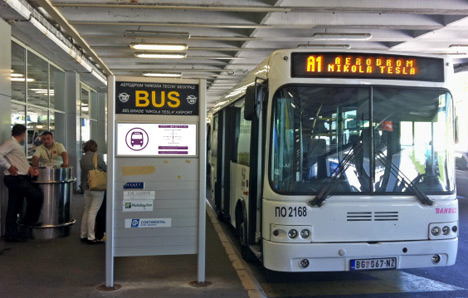 Bus No.607 will be relevant for travellers planning to stop in the New Belgrade area, separated from the Old Town by the Sava River. The fare and the conditions of travel are similar to the route No.72. The bus stop is located behind the taxi rank, at the Robni Terminal, and is a 250 meter walk away. The journey will take you about 30 minutes, at the most.

And to finish our review let’s take the most expensive, but most comfortable means of transport – taxis. Please note that the cost of travel is not determined by distance, but by the Belgrade area you are going to. There are a total of six of them. The price ranges from €14 to €60. You can check out the rates in more detail at the link.

With this video you will not only get an overview of Belgrade Airport, but also get a detailed look at the infrastructure of the terminals.